From the Barboursville webpage:

Moscato Ottonel and Vidal grapes are harvested young, to capture the fruit’s acidity, and in a traditional Passito method, allowed to air dry and raisinize on racks open to outdoor ventilation for months, concentrating flavors and sugars. A lengthy fermentation is induced naturally in older barriques, where aging continues for another year, in protracted lees contact, continuously stirred. Incomparably vigorous and luscious, every vintage is destined for lengthy cellaring.

Channel your inner curmudgeon and enjoy being a Grouch for a day.

National Grouch Day on October 15th sends out notices to all the grouches of the world to be their truest grouch. If you are a grouch, today is your special day. According to Sesame Street Magazine, the day celebrates all grouches and their way of life.

Sometimes grumps give backhanded compliments. “Your house looked horrible until you painted it.” Other times they don’t give them at all. Noise, silence, general activity makes a grouch generally unpleasant.  As per the Merriam-Webster dictionary, a grouch is described as:

It seems that a grouch may be happy (although they would never admit it) only when others are unhappy and grouchy.  It is then that they feel most comfortable with having others share in their grumpy, cantankerous, surly world with them.

Whether you are skeptical of when the holiday is celebrated or not, we can all agree that the day encourages people to be skeptical and to never accept anything without questioning its veracity.

Did you know the ‘other’ reason why cards were included in Red Cross packages? It wasn’t all poker and solitaire.

Playing cards to pass the time

War can be hell… and war can be absolute boredom.  There are few better ways to pass the time than by playing cards.  They’re easy to carry: small and lightweight, they fit into a rucksack, duffel bag or Alice pack without having to sacrifice any piece of essential gear.

Wartime decks have been used to help soldiers in the field learn about their enemies and allies, to identify aircraft and even teach American history.  In the 2003 invasion of Iraq, American forces used playing cards to identify the most wanted members of Saddam Hussein’s regime. 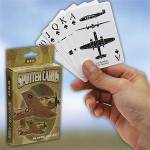 The U.S. Army and the United States Playing Card Company cooperation goes way back.  But it was their brand Bicycle that took it to a whole new level.

During WWII, Allied Intelligence officers contacted the card company to produce the most clandestine deck of cards…

I like free-verse poetry. Some of the comments in her discussion section do not see free verse as poetry at all. Which side do you fall in this argument ?

Pictures for my haikus were taken by Scott Gower while on vacation at the Outer Banks.

I personally found this one of their easier quizzes. Despite the timed out error, I got all of the answers correct.

Instead it is September 16 when

a proclamation by Father Miguel Hidalgo y Costilla on September 16th 1810, in the village of Dolores, near Guanajuato called for an end to Spanish rule in Mexico, encouraging rebellion and insurrection against the Spanish.

The Spanish Empire had been broken by Napoleon’s invasion of Spain, and imperial rule had been replaced by “juntas” in both Spain and the American colonies, while King Fernando VII was being held hostage by Napoleon.

The Proclamation of Dolores

Hidalgo ordered that the church bell be rung to gather his congregation, then called for insurrection and ended by calling out, Viva la Virgen de Guadalupe! Viva Fernando VII! Abajo el mal gobierno! [Long live Our Lady of Guadalupe! Long live Fernando VII! Down with the bad government!].

There are various accounts of what Hidalgo was reputed to have actually said. While the proclamation has gained national status, in reality, it is unlikely that Hidalgo disowned the King as he is supposedly said to have done.

Following his speech, Father Hidalgo raised an army and attempted to overthrow the Junta government, but he was eventually defeated. As his struggle against the establishment continued, he began to demand the full independence of all the Spanish American colonies, and the exile or arrest of all Spaniards within Mexico.

It was only after a ten year long War of Independence that Mexico’s independence was finally acknowledged by the Spanish viceroy on September 27th 1821.

Cinco de Mayo is an annual celebration held on May 5, which commemorates the anniversary of Mexico’s victory over the French Empire at the Battle of Puebla in 1862. Led by General Ignacio Zaragoza, the victory of a smaller, poorly equipped Mexican force against the larger and better-armed French army was a morale boost for the Mexicans. Zaragoza died months after the battle from an illness, and a larger French force ultimately defeated the Mexican army at the Second Battle of Puebla and occupied Mexico City.

There were several choices on what to celebrate on September 13 including Uncle Sam Day, Hug Your Hounds Day, Bald is Beautiful Day, and Grandparents Day, but once I saw it was International Chocolate Day, I knew which one I wanted to honor.

Dark chocolate has many proven health benefits. It is a powerhouse of antioxidants, which neutralize free radicals produced by metabolism of fat. This has an array of positive effects on your body, ranging from improving cardio-vascular health to preventing chronic diseases. It has been shown to reduce blood pressure, as well as, interestingly enough, help regulate blood sugar. Finally, it has also been linked to the release of endorphins – the feel-good hormone, which might explain why it is so widely known and loved as a mood-lifter. It is often mixed with other foods and flavors which enhance the taste and may improve your health as well, such as mint, orange, peanuts, almonds, coconuts etc.

Chocolate is good any time of the day from your morning hot chocolate until your bedtime snack of a a chocolate cookie or candy.

Click here to read the history of chocolate from History.com.

I didn’t take up smoking in college (when cigarettes were $.25/pack) because I was already a chocoholic (when candy bars were still $.10/bar). According to Google, The average cost for a pack of cigarettes across all states is $6.96 per pack or an average of $. 35 per cigarette. The price for chocolate candy outpaced non-chocolate in 2019, averaging 2.27 U.S. dollars per unit compared to 1.88 for non-chocolate. (I can find candy bars for about $1.25 at my local Krogers.)

Labor Day pays tribute to the contributions and achievements of American workers and is traditionally observed on the first Monday in September. It was created by the labor movement in the late 19th century and became a federal holiday in 1894. Labor Day weekend also symbolizes the end of summer for many Americans, and is celebrated with parties, street parades and athletic events.

Labor Facts from the Department of Labor

Americans first celebrated Labor Day in 1882, and it became a federal holiday in 1894 – nearly 20 years before the creation of the Labor Department.

The Labor Department was the first Cabinet agency led by a woman: Frances Perkins. Six women have held the title since then, giving us the record not just for the first, but for the most women secretaries as well. Many of the women who followed in Perkins’ footsteps have blazed their own trails. Elaine Chao and Hilda Solis were the first Asian American and Hispanic women in the Cabinet, respectively. Alexis Herman was the first African American to serve as secretary of labor. And Elizabeth Dole was the first woman to lead two different departments for two different presidents (Labor and Transportation).

3. Clam chowder could be a contentious dish at a Labor Secretary reunion.

Our 29 secretaries come from over a dozen states and three countries, but about one-fifth of them have called New York or Massachusetts home. Current Secretary Marty Walsh isn’t the first to hail from Boston. In fact, he’s not even the first Mayor of Boston to serve as Secretary of Labor. It’s an honor he shares with Maurice J. Tobin.

The women, at least. In fact, when the department’s female employees started wearing pants to work, it was notable enough to merit a mention in the newsletter. “Fashion forward” isn’t a phrase typically used to describe the department, but in the 1970s, we were ahead of other federal agencies in officially allowing women to work in pants, thanks to Elizabeth Duncan Koontz, the director of the Women’s Bureau and an advocate for women’s rights. Pants proved to be very practical, and the rest is history.

5. Our secretaries’ side hustles are next level.

Being a Cabinet member would be a pretty impressive accomplishment for most people, but for the 29 men and women who have served as secretary of labor, it’s just the beginning. Our first secretary, William Wilson, wrote poetry. Arthur Goldberg served as both a Supreme Court justice and ambassador to the United Nations. George Shultz also served as the director of the Office of Management and Budget, Secretary of the Treasury and Secretary of State. And Frances Perkins is a saint in the Episcopal church.

And you think you have to work with some pissy details,, read Smitty’s letter on latrines.

Back in the states, people were still dancing to the tunes of The Dorsey Brothers, Count Basie and Artie Shaw.  They listened to the songs of Doris Day, the Andrew Sisters, Lena Horne and Rosemary Clooney.  But, some others weren’t so lucky, in the army there was always latrine duty, as depicted in the following letter from Smitty.

Many are the times you have heard me refer to the latrines.  Never before had I any conception or realized the amount of genius and mathematical figuring that was necessary for the building of one of these casual looking comfort stations.

Yesterday I had the dubious honor of being selected, with four other disgruntled G.I.s, to labor on a detail whose sole aim and mission was the digging and building of a latrine.  It seems that in order to get a latrine built correctly there…

National Just Because Day is on August 27. Why this date? Well, you know … just, because.

From uniforms and branding to wall decorations and command seals, Navy Medicine is steeped in symbolism. Oak leaves, acorns and caducei adorn the collars and sleeves of Navy medical personnel. Red Crosses emblazon our white-hulled hospital ships. Images of triumphant eagles and fouled anchors and the colors “blue and gold” abound throughout the Enterprise connecting us to big Navy. Throughout its history, Navy Medicine has continually leveraged these powerful communication tools to create a service and mission identity. But where did these symbols come from? And why were they adopted? To read more, click here.